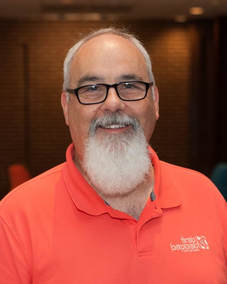 John Griffith was fortunate enough to be born and raised in Little Rock, Arkansas. He joined the FBLR team in the Spring of 2007 in the sound and lights department.  He started his career straight out of High School when he became a photographer’s apprentice in 1980.  Later, John received a technology degree in electronics and was able to move into his dream of using his abilities for the Glory of God.  He became the first producer, shooter, and editor for the Little Rock ACTS affiliate of the Southern Baptist Convention.  During his tenure there, the station received 7 national award nominations, winning three.  John has traveled as a sound engineer for bands, operated a sound, lighting, and video company, and worked for a national department store in video production and IT.  In February, 2014 he was able to return to his dream as the Full Time Media Director of FBLR.  John has been happily married to Ramona Griffith since 1990.

​John can be reached here!
©
Proudly powered by Weebly